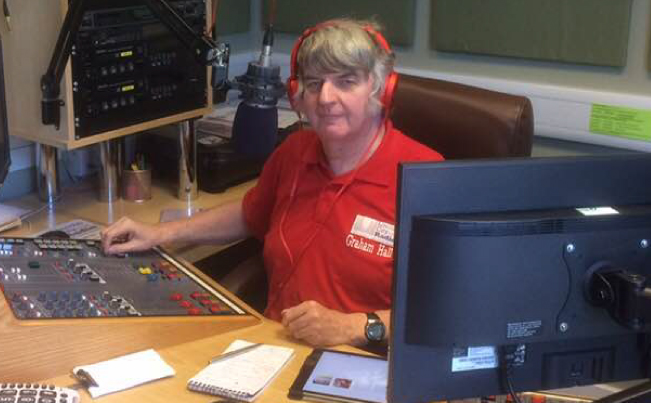 Derby born Graham always puts the blame for his love of music strictly in the hands of his older brother Ken who started buying The New Musical Express in the very early 1960's, and after listening to the top 20 on Radio Luxembourg on a Sunday evening, then writing them down in a little note book. Another fond memory is when Graham’s Dad came home on a Tuesday, Graham would go rooting through his work bag to find his newspaper that always had a copy of the current top 30.

Music was always on in the Hall household, an old valve type radio that took ages to warm up and get going. This would have been in the days of The Light Programme with its limited amount of music, this meant listening to Housewives Choice and Two Way Family Favourites. Then came the revolutionary mid 1960’s, and the music that was available 24 hours a day on the pirate radio stations. Graham was quite a latecomer to pirate radio, not really discovering it until early 1966 when most of the stations had been broadcasting for nearly 18 months or so. But to have pop music on tap for 24 hours a day, pure bliss. Around this time it was when Graham first played music to an audience, at the Dunkirk Youth Club in Derby attended by male and female members and lots of his school friends.

July 1967 meant time to leave school and start work. Graham found employment at a hardware wholesaler conveniently situated in the next street, doing all the usual menial tasks like sweeping up etc. Doing all sorts of other jobs such as delivering to the many hardware shops in the neighbouring counties, till eventually he was made warehouse manager in 1972. Around this time Graham married a girl he met through the music press, and moved to Long Eaton, eventually moving to another part of Long Eaton. Along came daughter Terri, and later, son Ben. Unfortunately the marriage didn’t last, which meant a move back to Derby. By this time Graham was approached by a larger hardware wholesaler based in Nottingham, who were complaining that he had been pinching all their customers. This was a big change, it included an area that included Kings Lynn, Cambridge and most of Lincolnshire. Places that he only ever had read about. But it proved to be an interesting time.

One of the accounts Graham had to go to was the Co-op in Lincoln, where he had to deal with a lady called Denise in the basement of the long forgotten department store. This was to be a time of great change, we got on very well, so much so that I asked her out, but driving from Derby to Lincoln every weekend was not easy. But well worth it. They eventually bought a house in Skellingthorpe, and happily made it a home. How did Lincoln City Radio come into Graham’s life, in the Skellingthorpe village magazine there was a letter appealing for volunteers for a community station that was in the planning stage from John Walton. Excitedly Graham applied, heard nothing for a few weeks, which was a time of dejectedness, but eventually Graham did get a letter from John asking for a meeting. This often proved difficult, as Graham was working full time, so he had to arrange several days in advance to visit John. But everything fell into place, the only programme that was available at the time was a programme called Sounds Instrumental on a Saturday afternoon, following on from the sixties programme following on from dear Stan Dring who became a very good friend. Sadly when Stan passed away, Graham was given the sixties programme, he claims the best thing that ever happened. In the 11 years or so, Graham has presented many programmes with all styles of music.

Denise knows of Grahams love for music, and often used to visit the studio to answer the phone for him, hence she became ‘Graham’s Little Helper’. Graham is sometimes known as Frog, or Froggy, this came from his daughter calling him ‘Daddy Frog’ when she was very small!. Graham says one of the nicest things to happen was when listeners started asking for more tracks by one of the many unknown American groups Graham had been playing, Jay & The Americans. Always willing to help with filling vacant programmes, Graham is a very valued member of the LCR FM 103.6 team.